THROUGH THE OLD TOWN OF PRAGUE AND JOSEFOV 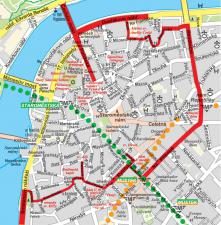 This is a tour to be made if you are staying longer in Prague. It consists of two parts of which the first is dedicated to the former Prague Jewish ghetto (and takes 4-5 hours), and the other is a tour of other places of interest across Prague’s oldest town, complete with a tour of the National Gallery collections (it takes another 4-5 hours).

Josefov is the name of Prague’s former Jewish Town, established as an independent fifth district within the territory of the Old Town of Prague following the emancipation of the Jewish population after 1850. It was named after Joseph II, under whom Prague’s Jews were at last granted some civil rights. The former ghetto used to be one of the poorest parts of the city and a large part of it was demolished at the turn of the 19th century. The only preserved structures are the synagogues, the town hall and the old Jewish cemetery. They survived through World War II simply because Hitler had wanted to set up in Prague a museum of the “former” Jewish nation.

Probably the most valuable structure in the Jewish ghetto is the Staronová synagoga (Old-New Synagogue). Although it is one of Prague’s earliest Gothic structures, it may still have had a predecessor. The Early Gothic synagogue consisting of a nave and an aisle dates from the 3rd quarter of the 13th century and has preserved its original appearance in spite of later partial reconstruction.

Opposite it on Červená street stands the Vysoká synagoga (High Synagogue) from the time of Rudolph II when the ghetto flourished in the late 16th century. The former Jewish town hall (Židovská radnice; Maiselova 18/250) on the corner dates from that time and has a clock with a Hebrew face. Both buildings underwent several reconstructions.

The U židovského hřbitova street takes you to Klausova (Klaus) Synagogue built in the early baroque style in the late 17th century and rebuilt in the 19th century.

Next to it stands the Old Jewish Cemetery (Starý židovský hřbitov) compound with the Pinkasova (Pinkas) Synagogue, built in the late 15th century in the Late Gothic style, and later rebuilt in the Renaissance style. In the course of the recent restoration, a Jewish ritual bath (mikvah) was discovered in the basement. Inside the synagogue is a memorial bearing the names of 77,000 Czech Jews who died in the Holocaust. The earliest tombstone in the Jewish cemetery dates from 1439. Because of lack of space the cemetery has several layers. The 12,000 tombstones have been erected here in the course of 350 years. The best known is probably the tombstone of Rabbi Löw, allegedly the creator of the Golem.

When this cemetery was closed down in the late 18th century, the New Jewish Cemetery was founded outside the limits of the then Prague (near the present-day Želivského Metro station) where Franz Kafka, Prague’s greatest Jewish author is buried. Weary visitors find themselves comfortably seated in the kosher King Salomon Restaurant (Široká 8, see p. 132).

Maiselova (Maisl) Synagogue (Maiselova 8/63), named after its founder, was built in the late 16th century in the Renaissance style but since rebuilt in the neo-Gothic style.

Most of these buildings at present house valuable collections and organise exhibitions. The Old-New Synagogue still serves its original purpose. Španělská (Spanish) Synagogue is located outside the centre of the former ghetto, on Dušní street, and was built in the late 19th century.

Along the banks of the Vltava River there are also many Christian structures as well as modern buildings in pseudo-historic styles, the Art Nouveau and the Cubist style of the turn of the 19th century. Čechův most bridge, not far from the former ghetto, is the shortest bridge across the Vltava River, the first of Prague’s 20th-century bridges (built in 1906), and the only one in the Art Nouveau style. It is remarkable for its rich decorations and illumination. This way to the Les Moules Restaurant, well known for its excellent cuisine (see p. 132).

Continue along the embankment past the hospital with a long history to the large complex of the Convent of St. Agnes (Anežský klášter; Na Františku 811). It was founded at the same time as the Old Town of Prague in the 1230s by King Wenceslas I, his wife Cunigund, and his sister Agnes of Bohemia, who became its abbess. It was originally a convent of the Poor Clares and a monastery of the Friars Minor, and also the first ever Gothic structure on Bohemian territory. A large-scale reconstruction of the complex for the National Gallery was completed in the 1980s.

The border between Prague’s two historic towns, namely the Old and the New Towns, runs along Revoluční street across náměstí Republiky square, Na příkopě and Národní streets. Most of the buildings here date from the 19th and 20th centuries and are a textbook of modern styles. Walking along this border at the lower end of Václavské náměstí (Wenceslas Square), you reach Můstek, named after a bridge which in the Middle Ages spanned the moat between the two towns and the remains of which can be seen on the basement level of the Metro station of the same name.

The short street Na můstku takes you to yet another of Prague’s towns, namely the New Town of St. Gall (Havelské Město), whose independence, however, was only short-lived. Located between Ovocný trh (Fruit Market) and Uhelný trh (Coal Market), it was founded at the time when the Old Town walls were built. As early as in the 13th century it was integrated into the surrounding town (and is recalled only by several regular streets, uncommon in this part of the town).

In the centre of the settlement, the Church of St. Havel (St. Gall) was originally a parish church built in the Gothic style, but rebuilt in the 17th and 18th centuries in the baroque style. It then became a part of the Carmelite monastery, until Joseph II’s reforms in the late 18th century.

In front of the church, a roofed marketplace (kotce) was built in 1362 which extended as far as Uhelný trh and, though in a different form, has survived here to this date. The neo-Renaissance building of the Česká spořitelna savings bank (Rytířská 29/536), designed by the leading architect Antonín Wiehl, was built here in the late 19th century.

On the opposite side of the street, the house U modré růže (At the Blue Rose; Rytířská 24/399) is a Gothic house rebuilt in the baroque style.

At one end of Rytířská street stands the Estates Theatre (Stavovské divadlo), at the other end is the Uhelný trh (Coal Market) square with the house U tří zlatých lvů (At the Three Golden Lions) with a memorial tablet commemorating the stay here of Wolfgang Amadeus Mozart. On the corner of the opposite house known as Platýz, a memorial plaque commemorates the stay in Prague of Ferencz Liszt.

Not far from here stands the Church of St. Martin in the Walls so named because the 12th-century Romanesque church which once stood in the centre of a settlement was partly integrated into the town walls. It was rebuilt in the Gothic style and served as a parish church. The Brokoff family of leading baroque sculptors were buried in the adjacent cemetery which, however, no longer exists.

Husova street, the communication axis of this part of the town, has a history dating back to the Romanesque period but archeological excavations suggest that it may be even older than that. As the terrain was gradually raised, the ground floors of the Romanesque houses are now in the basement of the current houses. The many churches and chapels which once stood here but of which only very few have survived attest to the then density of the population. Right on Husova street stands the Church of sv. Jiljí (St. Giles), originally a parish church, then a chapter church, and eventually a monastery church. The medieval church was rebuilt in the baroque style and decorated with frescoes by Václav Vavřinec Reiner who is buried in the church.

In the nearby Betlémské náměstí (Bethlehem Square) stands the reconstructed Bethlehem Chapel (Betlémská kaple), which was built in 1391 and where Master Jan Hus preached for several years from 1402. His execution by burning at the stake on July 6, 1415 in Constance (Germany) became a milestone in Czech history. Martin Luther called him his teacher and there is an exhibition in the chapel on the development of the non-Catholic Churches and thinking.

Rotunda sv. Kříže (Rotunda of the Holy Rood) on Karoliny Světlé street is a Romanesque church which has survived to this date. There used to be many more churches like this here. It dates from the 12th century and is still used for religious purposes.

The tour ends in the Smetanovo nábřeží embankment, Prague’s oldest one, dating from the 1840s and named after leading Czech composer Bedřich Smetana. A beautiful view can be had from here of Prague’s famous skyline. 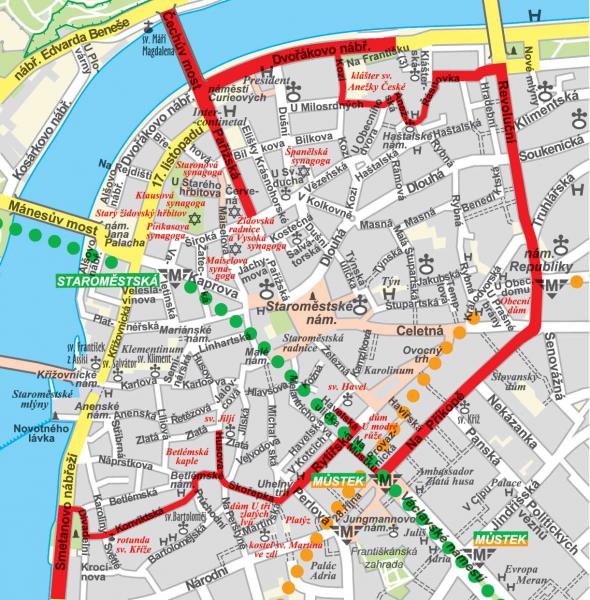 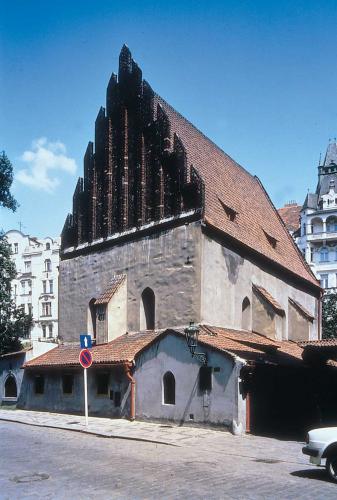 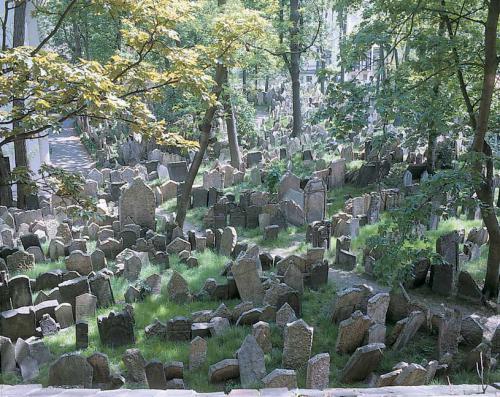 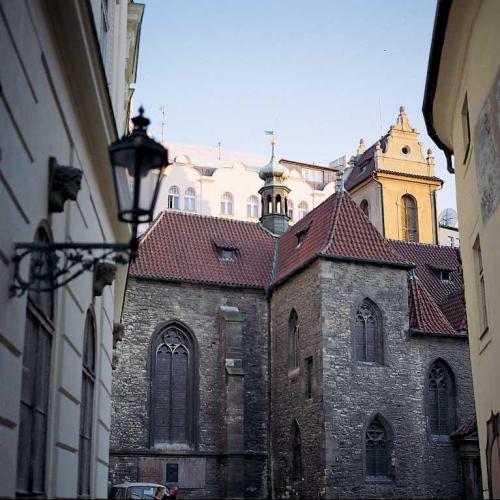 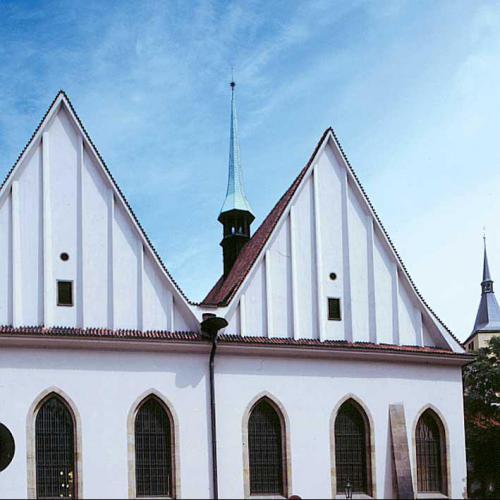