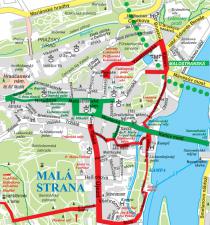 The tour of Malá Strana includes visits to the gardens and inspection of other places of interest and takes between half a day and a whole day. To see everything it offers it is best to make the tour between April and late October, starting at the Malostranská Metro station or walking from Hradčanské náměstí square down the Zámecké schody (Castle Staircase).

In Valdštejnské náměstí (Wallenstein Square) is the entrance to the garden of Ledeburský palác (Ledebour Palace; Valdštejnské náměstí 3/162). This early-18th-century garden is one of the ring of palace gardens on the southern slopes below Prague Castle. The others are the Pálffy, Kolowrat, and Fürstenberg gardens (the last mentioned one belongs to the Polish Embassy and is closed to the public). The baroque gardens are a specific feature of Prague’s architecture. They are terraced thanks to which beautiful views can be had from them of the entire city. From Valdštejnské náměstí, you can walk through the compound of Valdštejnský palác (Wallenstein Palace) which Albrecht of Wallenstein, general of the imperial army, had built here in the 1620s. The palace has richly decorated interiors and a large garden. The palace is partly home to the Czech Senate, and its historic rooms will be accessible to the public after restoration is completed. The Valdštejnská zahrada (Wallenstein Garden) is connected with the palace by a sala terrena decorated with painted scenes from the Trojan war. The ingeniously landscaped garden is adorned with copies of bronze statues made by Adrien de Vries (the originals of which were taken away as booty by the Swedish army at the end of the Thirty Years’ War).

Exit the palace compound at Klárov and take U lužického semináře street to Vojanovy sady, Prague’s oldest gardens. As early as in the second half of the 12th century, this space was a part of the bishop’s court. It remained in use after the palace was destroyed and in the 17th century was integrated as a garden into the Carmelite convent. The Carmelites had two chapels built here. The garden later served as recreation ground for young girls attending the school of the Order of English Virgins, and in the 20th century became accessible to the public.

U lužického semináře street (named after the Lusetian seminary once housed in No. 13/90) takes you to the Kampa island formed next to Charles Bridge by an arm of the Vltava River and also referred to as the Venice of Prague. The island’s current appearance dates from the 16th century when remains of the Malá Strana houses destroyed in the 1541 fire were dumped here, raising the ground level. Thanks to this, a part of the island was firm enough for houses to be built on it. The other half of the island is formed by gardens, open to the public since the 20th century. Some of the mills that once stood here have been preserved to date, among them the Štěpánovský mlýn mill in the Renaissance style, or the Velkopřevorský mlýn with a huge wheel visible from Charles Bridge. Further upstream of the Čertovka arm of the Vltava River stands the Huť mill with a smaller wheel. The Sovovy mlýny compound is currently being restored and will then be used as an art gallery.

Leave the island at the Church of St. John at the Laundry, whose name dates from the time when it was used as a laundry having been abolished by Joseph II. It regained its status as a church and its current appearance is the result of several reconstructions. However, the church stood here as early as in the 12th century, even before Malá Strana was founded.

Take Říční street where a memorial plaque on house No. 11/532 commemorates the stay of Karel Čapek, one of the greatest Czech authors, and his brother Josef Čapek, a leading painter who died in a concentration camp during World War II.

You are now in Újezd and have two options:

1. Either take the funicular railway or walk up Petřín Hill, with the Hladová zeď (Hunger Wall) perimeter wall from the time of Charles IV, a wooden church moved to Prague from Sub-carpathian Ukraine in the 1920s, the Štefánikova Observatory (Hvězdárna), the mirror Maze (Bludiště), and Rozhledna, a downsized copy of the Eiffel Tower built in 1891. From there you can either return back to Újezd or walk to the Strahov Monastery in Pohořelec.

2. Or you may decide to leave out the tour of Petřín, take Újezd street to Karmelitská, passing by the small Church of St. Lawrence (sv. Vavřince) in Hellichova. This church, too, is older than Malá Strana itself, and used to be the parish church of the one-time settlement of Opatovice back in the 12th century. It has been restored recently and is used for concerts. The Church of Our Lady Victorious in Karmelitská was originally a Lutheran prayer house, given to the Carmelites at the time of re-Catholicisation. The church is famous especially for the statue of the Bambino di Praga (Infant Jesus of Prague), donated to the church by Polyxena of Lobkowicz in 1628. Also in Karmelitská stands the Vrtbovský palác (Vrtba Palace; Karmelitská 25/373). Behind the inconspicous facade is a great surprise. Take the passageway to the Vrtbovská zahrada garden, one of Prague’s most beautiful baroque gardens. It is also a terraced garden, designed by František Maxmilian Kaňka with sculptural decorations by Matthias Bernard Braun, and the frescoes in the sala terrena the work of Václav Vavřinec Reiner, the three men having been leading artists of their time. Take the narrow Prokopská street to Maltézské náměstí square. The St. John the Baptist group of statues stands in front of the Church of Our Lady below the Chain, the main church of the commandery of the Knights of St. John of Jerusalem dating from the 12th century. The house U zlatého jednorožce (At the Golden Unicorn; Lázeňská 11/285) bears a memorial plaque commemorating the stay here of Ludwig van Beethoven.

At the other end of Lázeňská street you may enjoy the unusual calm of Velkopřevorské náměstí square with several Renaissance and baroque buildings. Walk past the Velkopřevorský mlýn mill back to Kampa island or up the stairs to Charles Bridge 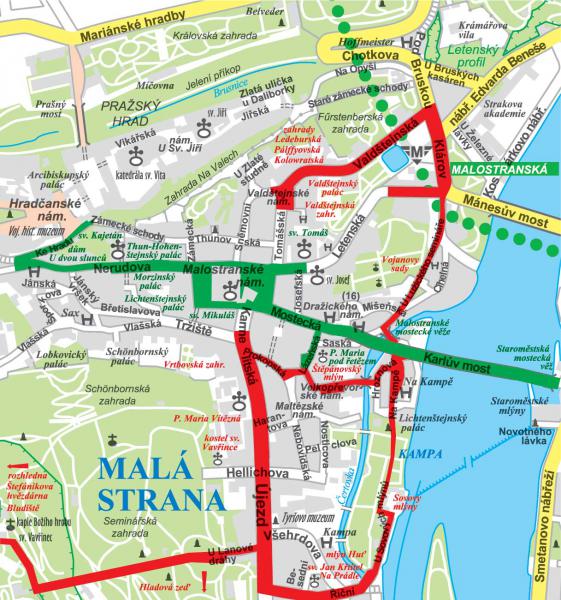 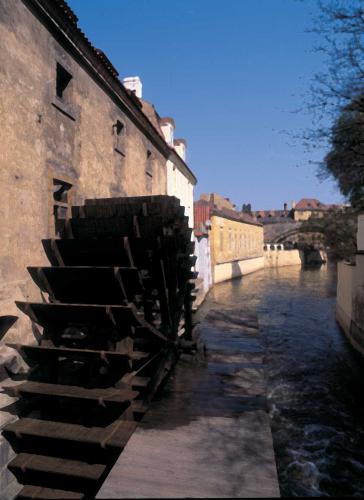 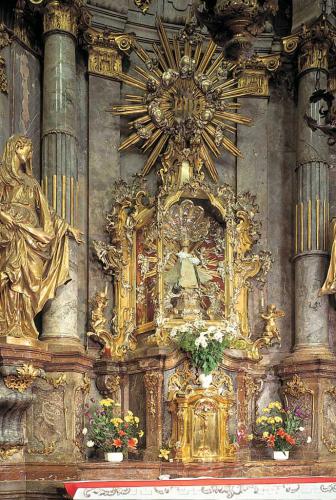