TOUR OF THE TOWN OF HRADČANY 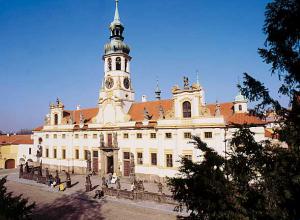 The town of Hradčany was founded as the third town of Prague after 1320, under the reign of King John of Luxembourg, but was granted the full rights of a free royal town only under Emperor Rudolph II. The tour may start at Pohořelec and may be followed by the tour of Prague Castle, or vice versa. Without an inspection of the interiors, two hours will suffice, interiors included it may take half a day.

Pohořelec is one of the three squares of this smallest of Prague’s towns and its Czech name alludes to the local frequent fires. The memorial of two astronomers, Johann Kepler and Tycho de Brahe, was erected here in memory of the house where the latter once lived. He died in Prague in 1601 and is buried in the Church of Our Lady before Týn.

The Strahov Cloister and grounds were created in the middle of the 12th century as a fortified complex of buildings even before the founding of the city of Hradčan. The Norbertines came here then and except for a period of time during the communist regime, still remain today. Evidence of hundreds of years of building can be found here – including remains from the Roman, gothic and baroque eras. The local cloister picture gallery and library are accessible to visitors.

Loretánské náměstí (Loreto Square) is named after the Loreto, a baroque compound of structures including the the Church of the Nativity (Narození Páně), gradually built around a copy of the alleged house of the Virgin Mary which stood here from 1626. The architects who worked at the compound included the two Dientzenhofers. Part of the Loreto treasure is the Diamond Monstrance decorated with 6,222 diamonds. The famous carillon dates from the late 17th century.

Also on the square is the Capuchin Monastery with the Church of Our Lady Angelic built in 1600.

The entire western side of the square is occupied by the Černínský palác (Černín Palace), one of Prague’s most monumental structures. It started to be built in the second half of the 17th century and was still not completed in the 18th century. From the mid-19th century on it was used by the military, and since the creation of the independent Czechoslovakia in 1918 to date it has been home to the Ministry of Foreign Affairs.

Passing by the palace gardens we arrive at Nový svět, once the suburbs of Hradčany whose tiny picturesque houses are now inhabited mostly by artists.

At the end of the street stands the Church of St. John of Nepomuk, dedicated to the saint in the year of his canonisation in 1729. At that time it belonged to the Ursuline Convent, dissolved by Emperor Joseph II. It was then used by the military.

The house in the opposite corner is usually referred to as the dům pážat (Pages’ House; Kanovnická 3/69) and has been preserved in its Renaissance form.

Take the U kasáren street leading to Loretánská. On your left stands the Martinic Palace (Loretánská 4/181), currently home to the Castle Guards. It was built in the early 18th century after a design by the Roman architect Carlo Fontana.

At the end of the street stands the Hradčany town hall (Hradčanská radnice; Loretánská 1/173). It was built in the Renaissance style in the late 16th century when the town was granted the full rights of a free royal town by Rudolph II. Hradčany’s coat of arms is above the entrance, and on the right-hand side is the “Hradčany elbow”.

On your right, the baroque Radniční schody (Town Hall Staircase) leads to Nerudova street below. It is overlooked by the Carmelite convent with the Church of St. Benedict. The church dates from the 14th century, but became a monastic church only in the 17th century, when it belonged to the male order of the Barnabites. The Carmelites came here at the end of the 18th century, bringing with them a mummy of the founder of Prague’s first convent which is still in the church.

On the opposite corner stands the Toskánský palác (Tuscany Palace; Hradčanské náměstí 5/182). Its early baroque reconstruction was designed by the architect J.B. Mathey, the sculptural decorations on the attic are from the workshop of Johann Brokoff, and the Archangel Michael on the corner opposite the town hall is the work of O. Most.

The Martinic Palace (the second of its name) stands in the corner of the square (Hradčanské náměstí 8/67). It was only in the 1970s that its Renaissance decorations from the turn of the 16th century were fully uncovered and restored.

The Schwarzenberský palác (Schwar­zenberg Palace; Hradčanské náměstí 2/185) is yet another example of Renaissance architecture, dating from the mid-16th century and currently housing the Museum of Military History. A baroque Marian Column from the early 18th century, the work of Ferdinand Maxmilian Brokoff, stands in the park in the square in front of the palace.

The Šternberský palác (Sternberg Palace; Hradčanské náměstí 15/57) was built at the turn of the 17th century in the northern part of the square, next to the Jelení příkop (Stag Moat). It has been used since the 19th century as a picture gallery, and at present houses the National Gallery collections of old European art.

The entrance to the picture gallery is somewhat obscured by the Arcibiskupský palác (Archbishop’s Palace; Hradčanské náměstí 16/56). The original residence of the archbishop in Malá Strana was destroyed by the Hussites. The archbishop’s seat was restored in Prague only in 1562 and this is when the palace was built. It was then reconstructed in the 17th and 18th centuries. 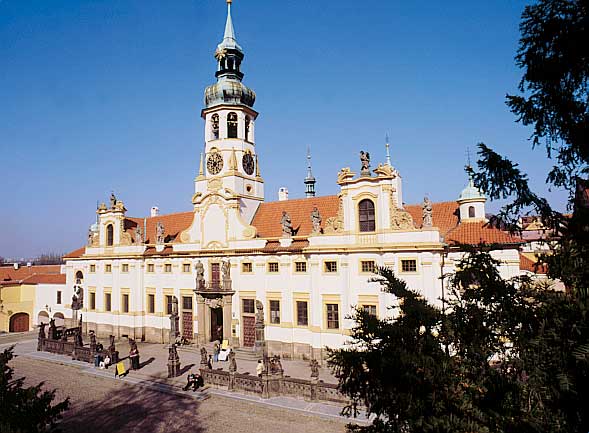 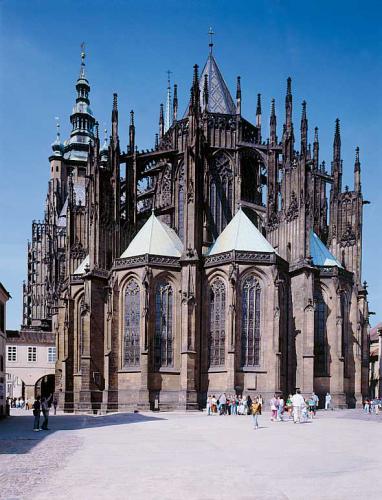 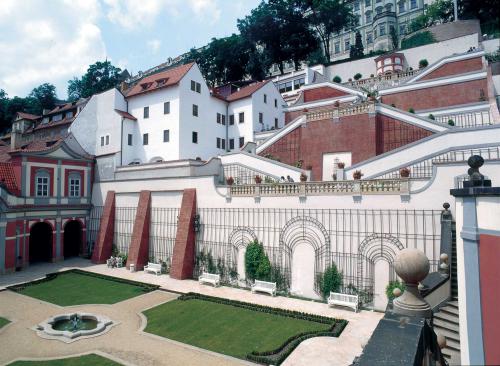