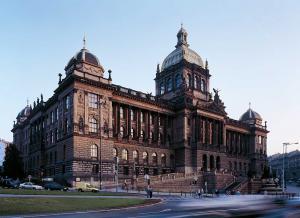 The tour of this part of Prague takes a whole day, with half a day dedicated to the town itself and 2-3 hours to an inspection of Vyšehrad.

The New Town of Prague is the fourth, and last, of Prague’s towns which closed the medieval development of Prague. The town, founded in 1348 by Charles IV, was actually fully built-up only as late as in the 19th century. Its network of streets with three large marketplaces has been preserved to this day. Václavské náměstí (Wenceslas Square, originally the Horse Market), is now the centre of the city. The buildings in the square are from the 19th and 20th centuries, but the square has been here since the Middle Ages. At the lower end of the almost 1-kilometre-long square begins the Old Town, at the upper end stands the National Museum (Národní muzeum) built in the late 19th century in the neo-Renaissance style after a design of Josef Schulz.

Right in front of the museum is a memorial to Jan Palach and Jan Zajíc, two young men who burnt themselves to death in 1969 in protest against the Soviet occupation of the country.

The equestrian statue of St. Wenceslas surrounded by the country’s patron saints is the work of Josef Václav Myslbek from the turn of the last century. Not far from the National Museum stands another 19th-century structure, namely the State Opera (Státní opera), designed by the Viennese architects Hermann Hellmer and Ferdinand Fellner.

You can then take the busy Vodičkova street with the neo-Renaissance Wiehlův dům house on the corner (Václavské náměstí 34/792).

A passageway connects Vodičkova street with the Františkánská zahrada (Franciscan garden) which once belonged to the Franciscan monastery. The Church of Our Lady of the Snows was founded by Charles IV in the mid-14th century but was never completed. Only the presbytery was built which, however, is the tallest church in Prague (33 metres). The interiors are in the early baroque style.

Take the passageway back to Vodičkova street and opposite you stands the Lucerna Palace (Palác Lucerna; Vodičkova 36/704), a large multi-functional compound built here by the grandfather of former Czech President Václav Havel.

The U Nováků house (Vodičkova 28/699) is yet another early 20th-century structure, designed by the architect Osvald Polívka in the Art Nouveau style.

The Vyšší dívčí škola girls’ school (Vodičkova 22/683) was designed by Ignaz Ullmann in the 19th century in the Czech neo-Renaissance style, typical of which is rich sgraffito decoration.

Karlovo náměstí (Charles Square; originally the Cattle Market) is Europe’s largest square covering an area of 80,500 sq m and is best seen in its entirety from the tower of the Novoměstská radnice (New Town Hall) in the north-eastern corner of the square. The town hall began to be built in the 1370s. A large part of the Gothic structure has survived in spite of the later reconstruction in the Renaissance style.

In the middle of the square, at its eastern side, stands the Church of St. Ignác (St. Ignatius) built in the early baroque style in the second half of the 17th century. Most of the interior furnishings date from that time.

At the opposite side of the square, Resslova street leads towards the Vltava River. It has two churches one opposite the other. Part of the Church of St. Cyril and Methodius is a Memorial of Reconciliation, in memory of the men who assassinated Reichsprotektor Reinhard Heydrich at the time of the Nazi occupation and then were in hiding in this church. Opposite it stands the Romanesque Church of St. Wenceslas.

At the end of this street stands the Church of Our Lady and Charlemagne, also known as the Na Karlově Church, and once a monastery church. It was rebuilt several times but its original architecture from the time of Charles IV has been preserved. It is an octagonal structure, reminiscent of the Aachen church dedicated to Charlemagne.

Most of the other buildings on this street are hospitals. The tour may then continue back to Karlovo náměstí or across the Nuselský most bridge, past the Congress Centre to Vyšehrad.

The corner building at Karlovo náměstí 40/502, known as the Mladotův or Faustův dům (Mladota/Faust House) has a baroque facade on a Gothic palace dating from the 14th century. Several of its owners had devoted themselves to alchemy, and the Prague version of the Faust legend is linked to this building.

Continue to Vyšehradská street and through the gate at No. 49 enter the Emauzy (Emmaus monastery) compound of what was once a Benedictine monastery where services were conducted in the Slavonic language. It was founded by Charles IV and officially consecrated during Easter 1372. The monastery was seriously damaged at the end of World War II, during an air raid on Prague. As if by a miracle, the mid-14th-century wall paintings in the ambulatory survived.

The opposite Church of St. John on the Rock (sv. Jana Na skalce) is one of the finest examples of the Bohemian baroque, and was built in the first half of the 18th century by Kilian Ignaz Dientzenhofer.

Vyšehradská street leads to the Botanical Gardens of Charles University, moved here 100 years ago from the opposite bank of the Vltava River, where it had been founded by the Empress Maria Theresa back in the 18th century.

Trojická street with the Baroque parish Church of the Holy Trinity (Nejsvětější Trojice) leads to the embankment. From here, you may either go left to inspect several Cubist houses at the foot of the Vyšehrad hill, or go right to the Palackého náměstí square with a memorial to František Palacký, a Czech historian, which is an early-20th century work by the sculptors Stanislav Sucharda and Josef Mařatka.

At the end of the row of houses on Rašínovo nábřeží embankment stands the Tančící dům (Dancing House; Rašínovo nábřeží 80/1981), completed in 1996 and designed by architects Frank O. Gehry and Vlado Milunič. The facade ressembles the waves of a river, the house’s silhouette a pair of dancers.

In Jiráskovo náměstí square stands a memorial to Alois Jirásek, a Czech writer who lived in one of the houses in the square.

The nearby water tower used to be a part of the onetime mills, most of which have since been demolished. Just like the other water towers in Prague, it dates from the late 15th century, but was rebuilt several times. Next to it, the Mánes building, which belongs to the artists’ association of the same name and was built in the Functionalist style, is used for exhibitions.

Masarykovo nábřeží embankment, dating mostly from the early 20th century, is a display of architectural styles. Probably the most interesting here is the Hlahol house (Masarykovo nábřeží 16/248) which belongs to the Hlahol choir, and was built in the Art Nouveau style by architect Josef Fanta.

Some of the islands on the Vltava River have become oases of greenery in the city. Slovanský ostrov (Slavonic Island) has been the venue of concerts and balls since the 19th century.

Národní divadlo (National Theatre) was a symbol of Czech emancipation in the then Czech-German Prague and was built in 1868-1881, financed from a nationwide collection of funds. The neo-Renaissance building designed by the architect Josef Zítek was destroyed in a fire shortly before it was scheduled to open and had to be built from scratch again. Construction then took only two years, and was designed by architect Josef Schulz. Bedřich Smetana’s opera Libuše opened the first season on November 18, 1883. Decorations in both the interior and exterior of the theatre are by leading Czech artists of the time. In the 1980s, when the theatre underwent large-scale reconstruction, several modern structures were built in the vicinity, one of which is now home to the Laterna Magika theatre. 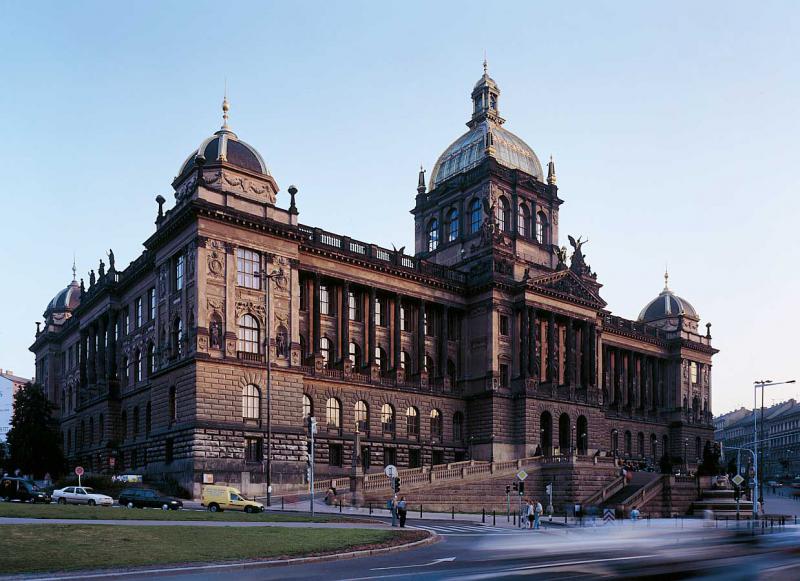 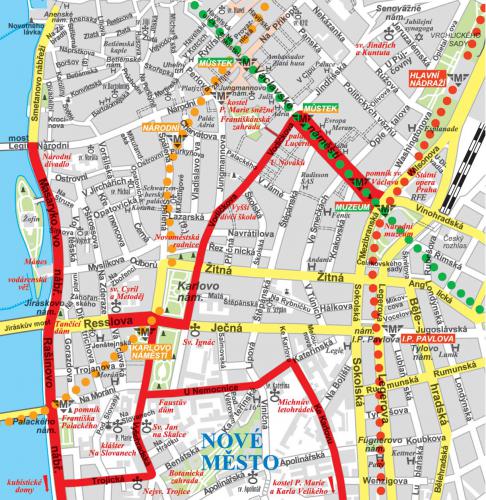 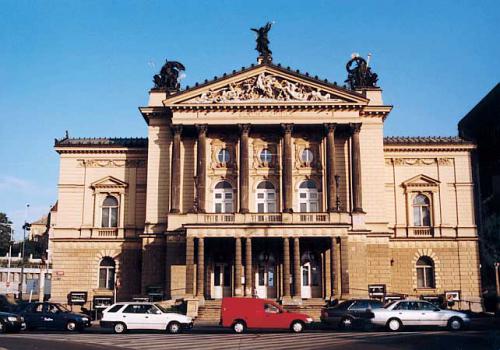 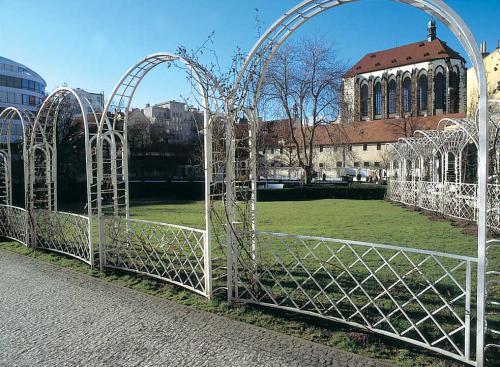 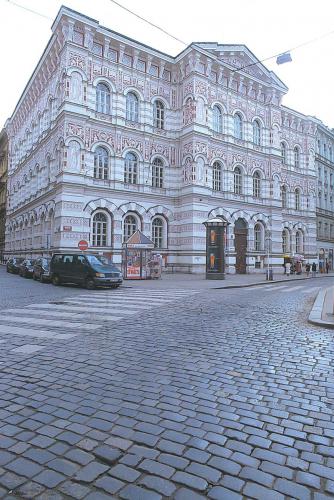 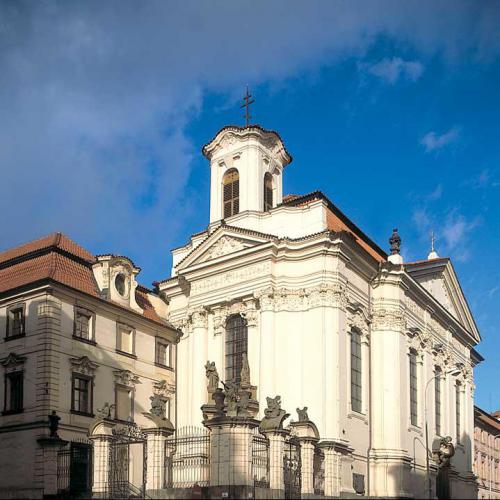 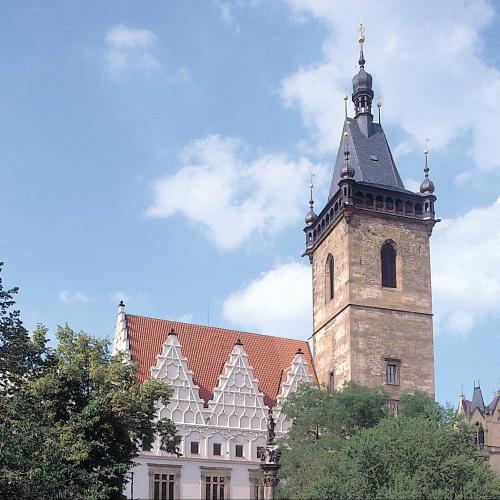 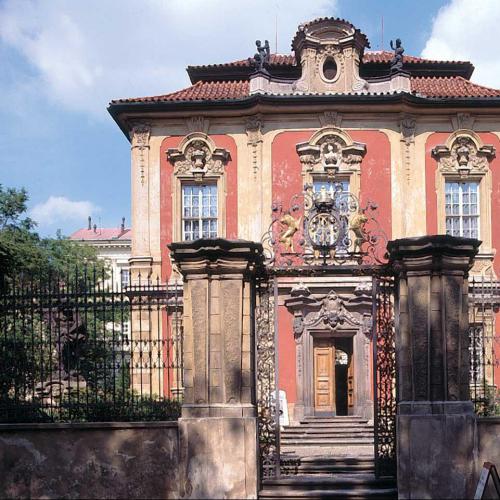