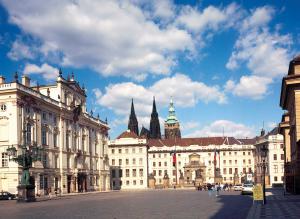 Turn right at the end of Nerudova street and you have arrived at Prague Castle.

The tour of Prague Castle takes two hours provided you do not enter the buildings and the gardens. A thorough inspection of Prague Castle may take the whole day, but without the art galleries, 4-5 hours suffice. Earphones for a guided tour are available at the information centre.

The seat of the rulers of Bohemia was built on a hill overlooking the River Vltava probably as early as in the 9th century and was gradually expanded over the centuries, bearing traces of all historic periods.

Enter Prague Castle’s first courtyard through the main gate from Hradčanské náměstí square. This is the youngest part of the castle, dating from the 18th century. Then take a trip against the flow of time, with the second courtyard dating from the times of Emperor Rudolph II in the 16th century, but also with examples of the earliest building activity at Prague Castle, namely the remains of a late 9th-century church discovered by archeologists in the passageway next to the Castle Picture Gallery. The Castle Picture Gallery (Hradní obrazárna) has a collection of works of art started back in the times of Rudolph II. It is housed in the former stables. The exquisite castle halls on the upper storey also date from the period of Rudolph II.

Take the passageway with the remains of the medieval fortifications to the third courtyard with its centrepiece, St. Vitus’s Cathedral. Its main facade was completed only in the 20th century, but the cathedral was founded back in 1344, when the Prague bishopric was elevated to archbishopric. The cathedral’s first builder was Matthias of Arras, who designed the circumferential chapels in the east. Peter Parler continued the construction from 1356 until his death in 1399. He built the first half of the church including the Zlatá brána (Golden Gate) with a unique vault. The mosaic, rare in central Europe, and its placement attest to the significance assigned by Charles IV to his seat, as do the interiors, especially the decorations in the Chapel of St. Wenceslas, Bohemia’s patron saint. The chapel stands above the grave of the saint which was here already at the time of the original 10th-century church that was later rebuilt. The current cathedral is the third structure on the same site.

The Královský palác (Royal Palace) has also evolved in the course of several centuries. The upper storey with the Vladislav Hall dates from around the year 1500, the lower storeys are even older.

An example of the Romanesque style at Prague Castle is the Church of St. George. It was built in the 12th century on the site of an earlier church belonging to Bohemia’s oldest convent, namely the convent of the Benedictine nuns, established in the mid-10th century. The church currently houses National Gallery collections.

The Zlatá ulička (Golden Lane) in the north-eastern part of the Castle consists of the tiny dwellings of the castle sharpshooters built next to the town walls under Rudolph II in the late 16th century.

Prague Castle has several gardens, a tour of which can start at the Old Castle Staircase (Staré zámecké schody) and end at the lookout ramp at the end of Nerudova street. The landscaping and interconnection of the gardens are, for the most part, the work of the architect Josip Plečnik. Next to the main castle entrance is the Na baště (On the Bastion) garden. Walking along the Jelení příkop (Stag Moat) across the Prašný most (Powder Bridge) you arrive at the Royal Garden (Královská zahrada). Its history can be traced back to the Renaissance times and the reign of Ferdinand of Hapsburg who had the Letohrádek královny Anny (Queen Anne Summer Palace) built here, a unique example of the Italian Renaissance on Czech territory. The famous Zpívající fontána (Singing Fountain) dates from the mid-16th century. The other Renaissance structures here, including the Velká míčovna (Large Ball-game Court), date from the times of Rudolph II. The gardens are open in the summer season. 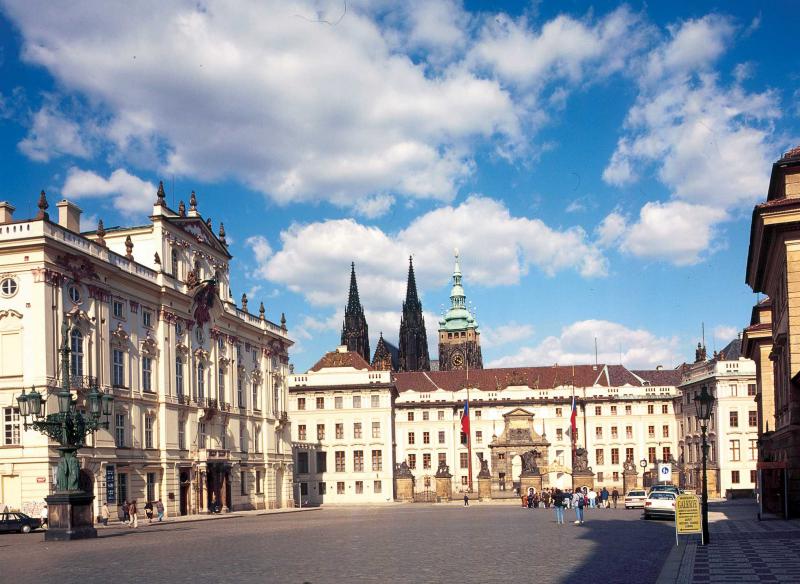 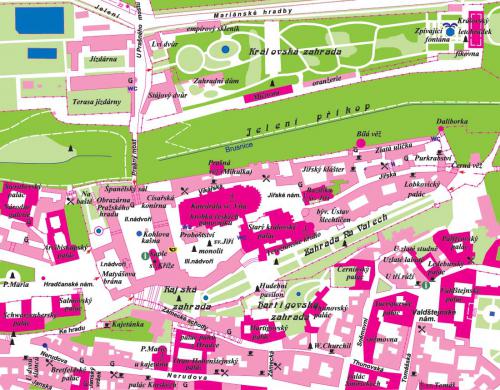 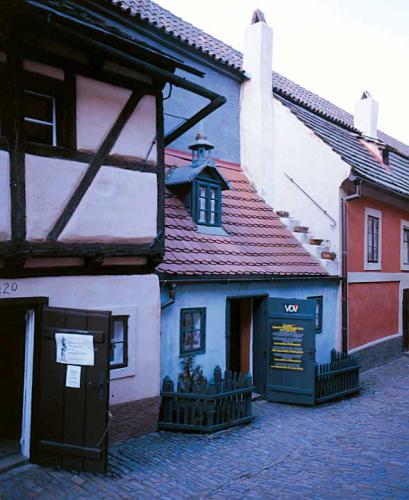